A Real Age of a Human is His Biological Age. 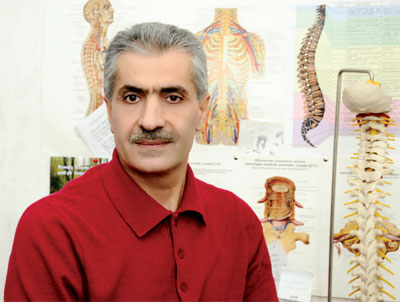 A Real Age of a Human is His Biological Age.

-80% of vertebral diseases are of idiopathic character that is the cause hasn’t been found until the end. In general, there are no final decisions in nature, the same can be said about the human’s spinal column, which gets worn out with age and undergoes deformation. A human as a microcosm obeys the nature’s whims.  How can the decisions be final if a human and nature constantly endure changes in time and space? All vertebral diseases are of nervous origin. The spinal cord is a supporting column of the whole body, and 85-90% of diseases appear when it is injured. The Japanese say: the more flexible is your backbone the more vital you are. There exists a human’s biological age – this is his real age. For instance, a person might be 30 years old but he has an organism of a sixty-year old human, and vice versa.

- Do the spinal cord diseases occur due to the wrong lifestyle?

- Certainly, and due to unawareness of healthy lifestyle rules. In the first place you should know your body, like, for example your automobile, to be able to drive it safely. It is necessary to know the motion technique, the sequence of their arrangements, and physical and breathing exercises loads. Of no less importance are: healthy diet, water usage and complete sleep.

-Do the backbone diseases occur more frequently at certain age group, or there is no such division?

- These diseases do not spare anybody, in no age. Even a new-born baby at birth  can have backbone injuries causing  neck curvature.

- What to do in order to have a healthy backbone?

- It is necessary to know the behavioral and correct motion culture. For instance, when you wake up do not get up abruptly, The Scientific researches show that cats before getting up do about 60-70 movements. We advise, before getting up from your bed, turn to you right side, then lean on your arm and sit. In human’s lifestyle the motion flexibility plays an important role, which demands a certain coordination quality.

- Does the extra weight have an impact on the spinal cord?

- An extra weight means an extra load on musculoskeletal system, heart and vessel system, and a waste of extra energy to maintain 36.6 C of body temperature. The cause of extra weight is also hypodynamia – lack of motion.

- Can the backbone diseases be inherited?

- As to the structure – some can be inherited such as scoliosis, kyphosis and others.

- In addition to your being manual therapist, psychologist, and a teacher, you are also a poet, the author of the poem “The Hell”, devoted to the tragic earthquake of 8 December 1988.  How do you combine this multiplicity in yourself?

- I am just as I am. Everything in nature is sensible. Just like a human body so are all objects and phenomena interconnected. Sometimes I have bursts of desire to write. The poem “The Hell” performed by master-reciter national artist of RA Vladimir Abadjyan  entered the “Gold Fund” of national radio, and then became a documentary.

The interview by Susanna Tamazyan