“85% OF DISEASES OCCUR DUE TO THE PROBLEMS IN SPINAL CORD” 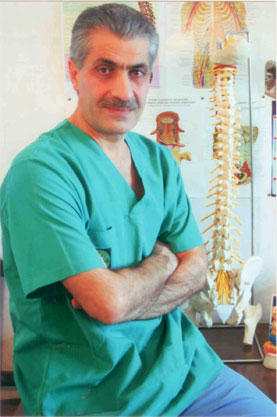 On the desk of the academician doctor Karapetyan, a real member of medico technical Academy of Russian Federation ,there were two separate diaries. One was devoted to patients’ hours listed even for a few weeks ahead, the other one was with numerous honorable mentions and words of gratitude to the experienced physiologist and manual therapist who during  long years of work put to foot over one thousand people suffering from various problems of spinal cord deflections and musculoskeletal system. Doctor Karapetyan came to medicine at mature age, having success in sports, being awarded the honorable pedagogue and couch of RA, and then he graduated from post graduate course and doctorate course of Moscow SRI of Physiology and Hygiene and international higher school of non traditional medicine of the USSR Academy of Science. Today doctor Karapetyan  the author of over 100 scientific and literary works is a guest at “The Voice of Armenia”.

-Your choice of a doctor’s profession is by chance or regularity?

- It is sooner a regularity. I have been interested in medicine since my childhood, always rushed to help my family when having any health problems. Yet after school I took up sports, entered a department of football at Yerevan State Institute of Physical Culture. Having worked for a long time as a couch, I never missed an opportunity to gain knowledge in medicine and physiology often giving first aid to my students during practice and matches. And the moment came when I realized that my true vocation is medicine.

- What about a school of Gagik Karapetyan?
- The peculiarity of my method in medicine consists in the fact that I accept a human’s organism as a whole system where everything is interconnected. In the process of treatment I use the whole patient’s organism, trying to cure not only the disease itself, but the reason causing the disease. The combination of disease symptoms, genetic, age and sex peculiarities, human’s lifestyle, body energy are taken into consideration, and I treat each patient specifically. For instance, women more often suffer from osteоchondrоsis than men. It is stipulated by specific construction of women’s spinal cord and by several factors of hormone changes in women’s body. That is why the treatment of this disease for women varies from that of men. Besides, in my method the primary is heeling massage. For example, before applying manual bumps, it is necessary to prepare the body of the patient regulating the patient’s muscle system. One more peculiarity of my method is rejection of any chemical in the process of healing. The nature that gave birth to humans, created a lot of natural means and products, knowing the power and the value of which it is possible to spare the patients different illnesses.   An important factor in my method is given to consideration of interconnection of human and nature. All changes taking place in our body are directly connected with seasonal changes in nature, and possessing this knowledge can stipulate the effect of treatment.

- What diseases are included in the sphere of treatment of physiologist – manual therapist?

-Deflections of spinal cord and musculoskeletal system, among which are mostly spread osteochodrosis, vertebra hernia, sciatica, radiculitis etc. These are primary diseases on the basis of which other numerous diseases grow causing disruptions in other organ functions.. By the way, according to researches of late soviet period 87.5% of  people walk incorrectly, with carriage deflections and musculoskeletal system, which further results in other spinal cord diseases. Today this figure is higher which gives evidence of  more patients at manual therapists’ offices. 85% of diseases in its turn develop due to the problems with spinal cord. For instance, our research showed that nearly 90% of people with spinal cord function deflections cannot breathe properly/ And something more: the furniture designed for children and adolescents, and even for adults does not correspond to international ego metric standards which also brings to problems in spinal cord. So, we have actual problems demanding governmental care to maintain health of people of all ages and activity; today as never before we have a problem to preserve genetic fund of Armenian nation.

- It is not a secret that the rescue of a drowning person is the deed of that very person. Doesn’t it mean that our health depends on ourselves to a great extend?

- No doubt, it does, but it is important to understand such notion as medical competence and culture. Unfortunately the culture of acknowledging our body and movement function in our society is almost at zero level. We are not taught how to keep carriage, to train correct walk, to lift loads etc. Of no small importance is prophylaxis. There is a saying among manualists: people are divided into three categories – those who suffered pains in the spinal cord, those who have this problem, and those who will have the problem. It means that in our living conditions there is hardly anyone who can avoid problems with spinal cord and musculoskeletal system. They are actually life important organs which in time worn out and need regular correction. That is why it is a need for every person to have medical check-up twice a year and if needed to take a course at a manual therapist, and have a correction of spinal cord once or twice a month. This, of course, is very personal and depends on gender, age, psychophysical peculiarities of each person and actual health problem. One thing is very important: to turn to a doctor having first symptoms of a disease, not to allow it to grow into  latent period after which the advent of pain symptoms and the peak of the disease is inevitable.

- Gagik Karapetyan is famous not only as a professional  manual therapist but also as a writer, the author of lyrics works.

- I have written verses since my youth, but the literature basically came to my life after Spitak earthquake. Born in Gyumri I responded to the tragedy not only as a medical man but also as a citizen. My poems were published in newspapers and magazines, and in 1998 the presentation of my first published book “The Hell” poem was held. The book became popular among public and in 2001 this poem performed by Armenian national artist Vladimir Abajyan was included in the “Gold Fund” of the national radio. Two years ago a documentary film was shot on the basis of the poem. My second book – a poem “Love and Separation” came out in Istanbul thanks to the chief editor of Armenian newspaper “Marmara” Roper Hattedjyan. My novel “Gugo” is going to come out and it is devoted to my friend having lived the horror of the earthquake and losing his mind.

-As far as I know, you are busy teaching your system of treating spinal cord and musculoskeletal system diseases.

-To be exact, this is a method of healing massage. There have been no diploma specialists on this medical discipline in Armenia so far; our massage specialists got their licenses basically after taking training courses. Last fall on the state basis at Yerevan medical college a department of medical massage was opened, the curriculum and methods of teaching was assigned to me. In a year the team of our specialists will expand with the first diploma graduates-massagers.